We're so excited to finally be able to offer our new CD for pre-order, along with lots of cool swag (of course!)
Just CLICK HERE to check out all the goodies and place your order now! 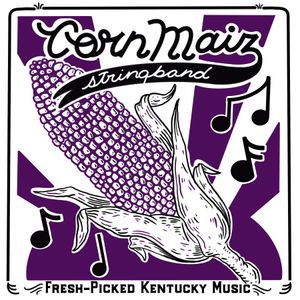 CornMaiz is a nouveau old-time family string band from Kentucky featuring original music, traditional, old-time tunes from Eastern Kentucky, and unique versions of some famous cover songs.  The band features clawhammer banjo, mandolin, guitar, bass, fiddle, and three part harmonies.  Performances also include the amazing traditional Appalachian dance styles of flat-footing and clogging.  The group has performed at festivals and events throughout Kentucky, Tennessee, Virginia, and in Mexico.
CornMaiz seeks to present the evolving traditions of Appalachia, and provide cultural perspectives and stories from their oft-stereotyped region, while sharing the fun and generous spirit of the genre!

More domestic dates are being added now that things are opening back up, so check back soon for more shows!

Zoey Barett was raised on the road with her musical family, and has been fiddling since the age of 5, learning from such Kentucky greats as Paul David Smith, John Harrod, Jamie Wells, and Jimmy McCowan. She later tacked on upright bass, guitar, piano, and banjo to her repertoire of instruments, taking time to develop her songwriting and harmony-singing chops along the way. She attended the School for the Creative and Performing Arts in Lexington, KY, and currently performs in the ensembles CornMaiz, Cornbread & Tortillas, and Zoe Speaks, in addition to pursuing her work as an artist and stylist.

Carla Gover is an eighth-generation Kentuckian who hails from a small coal town in Eastern Kentucky, and her rural sensibilities permeate the work that she does and the music that she plays. A veteran of the folk scene, she has performed and recorded with such artists as Jean Ritchie, Mark Schatz, Dudley Connell, Stuart Duncan, Dirk Powell, Bruce Molsky, Ricky Simpkins, and many more. Her most recent album, "Wings",  reached #1 on the Folk Music DJ Charts. The Old-Time Herald says, “Carla’s music contains the best elements of traditional Appalachian Music, including purity, intensity, integrity, and vivid imagery.”

An award-winning singer-songwriter, she has covers by major artists as well as songs in film and documentary soundtracks.  She was selected as a Master Artist in both Traditional Flatfoot Dancing as well as Appalachian Music by the Kentucky Arts Council. She performs solo, as a trio, and with various ensembles including the rootsy folk group Zoe Speaks, the trad Kentucky CornMaiz Stringband, and the bilingual Folk Opera Cornbread & Tortillas. She is the Artistic Director of both Cowan Creek Mountain Music School and the Cornbread & Tortillas Artist Collective.

Arlo Barnette is an accomplished guitarist and percussionist from the mountains of Bath County, Kentucky, who has studied many styles (including traditional Kentucky music) from a young age. He is set to graduate from Morehead State College with degrees in English and Spanish.

His stylistic range and formidable chops add flavor and virtuosity to the band, and his charismatic performance style makes him a joy to watch onstage. He is on the faculty of the Cowan Creek Mountain Music School and also works for WUKY Lexington, an NPR station.

Yani Vozos is a singer/songwriter and multi-instrumentalist (guitar, mandolin, charango, and sitar) originally from Estill County, KY. He performs original music in many styles ranging from acoustic folk-rock rhythms to funky jazz grooves to traditional old-time and bluegrass, as well as the Latin music he began exploring during his service for the Peace Corps in Honduras.

His music is upbeat with writing that focuses on positivity and universal spiritual connections with the earth that everyone can relate to. Yani writes music directly from his heart with the intention of sending out vibrations of love and joy to inspire people around the world. In addition to his performing career, he regularly teaches workshops in schools around the state of Kentucky, with an emphasis on creating increased access to the arts for underserved populations, refugees, and immigrants.
Yani also performs with Appalatin, Cornbread & Tortillas, and his own Kentucky Soul Collective.